This fully restored manor house – a charming residence of great distinction dating from the second half of the 19th century – lies at the heart of the listed village of Grez-Neuville. The rooms are large, each one decorated in its own individual style, with a clear view over the landscaped grounds or river. The terrace – where breakfast may be served during the summer – looks out over the quiet and peaceful grounds planted with century-old trees along the banks of the river Mayenne.

Our gites and furnished in outbuildings 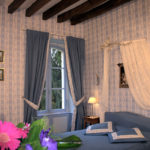